Village Keepers, a registered non-profit, formed early in 2015 as an independent group which described itself as:

A coalition of concerned citizens from Maplewood, NJ who seek a balance of development with preservation of character. You probably know us from those lawn signs that have sprouted up around town with the rallying cry to “Keep the Village A Village”

Village Keepers presented a platform urging re-evaluation of options at the site so that developer proposals could be properly compared to other alternatives for the publicly owned land and building.   It’s lawn sign campaign came close to breaking a township record, with 450 signs placed in about six weeks. 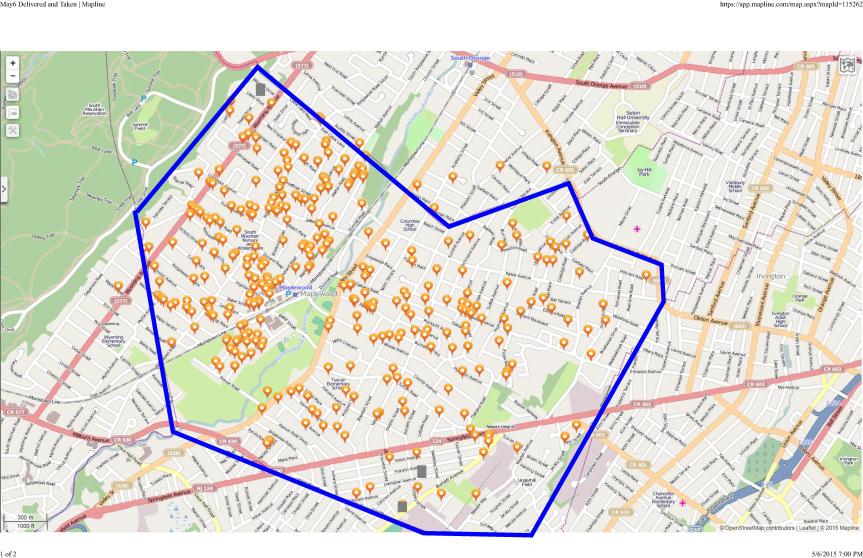 The genesis for Village Keepers came in part from a series of meetings of the Maplewood Village Alliance in Spring of 2015.   At  those meetings MVA member Fred Profeta asked the Board to act on the “demolition clause” in the MVA’s charter.  The text of the clause appears in the Maplewood Code in Chapter 237 and is copied here in its entirety:

Demolition. In keeping with the preservation element of the Township of Maplewood’s Master Plan, which recognizes the need to preserve structures of historical significance, no building within the district shall be demolished without its owner demonstrating significant financial hardship and without having a proposed alternative for new construction (i.e., schematic plans drawn by a licensed architect or engineer) approved by the MVA Design Review Committee and Village Alliance Board and the Planning Board with proof of project financing, i.e., lease agreements, loan agreements, mortgage commitments, etc., except in instances where the Uniform Construction Code requires the demolition of a fire-damaged building.

The Boards initial vote on Mr. Profeta’s request was to not apply this section of the MVA ordinance.  At  subsequent meeting Mr. Profeta ask that the Board document its rationale for doing so, so as to not create a broad precedent as to the applicability of the Demolition Clause to other structures in Maplewood Village.  Shortly after these meetings Mr. Profeta, a founding member of the Village Alliance and contributor to large portions of the MVA ordinance when it was written, resigned his position.

Village Keepers studied the legal, economic and community aspects of the site and promoted the following platform: 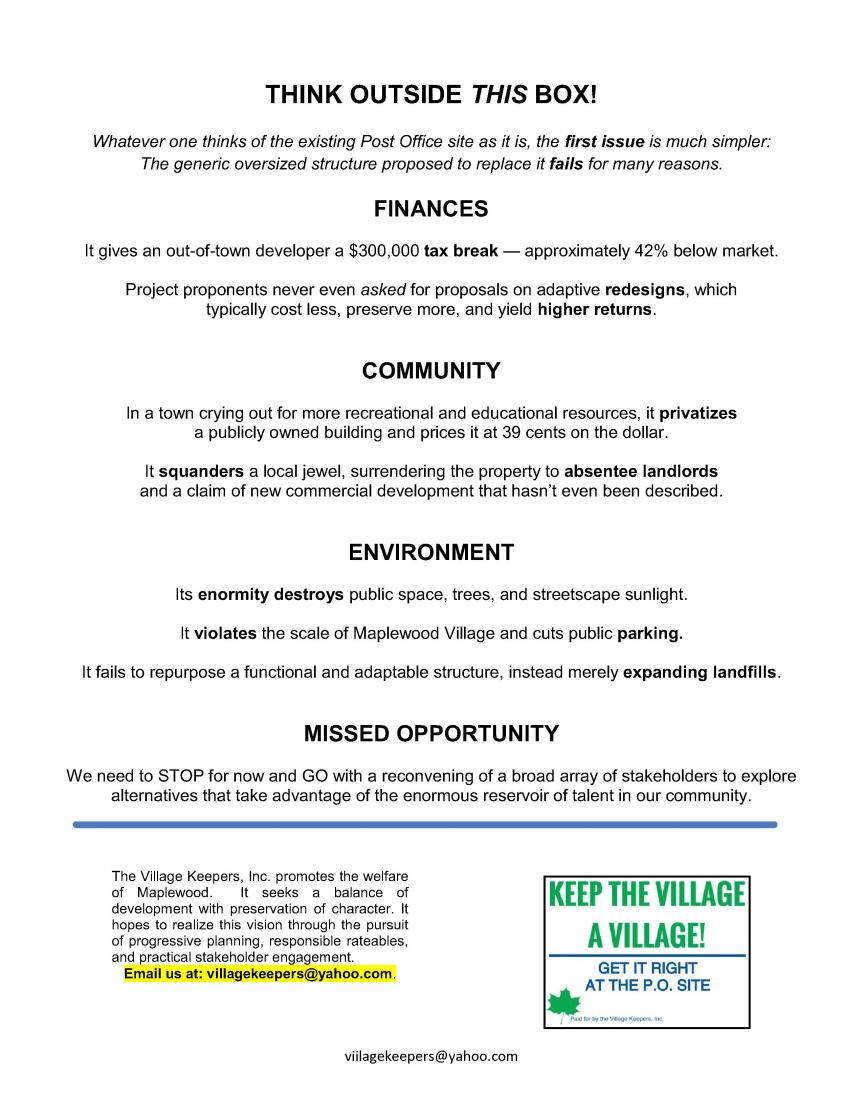 In mid-2015 Village Keepers filed an appeal before the Maplewood Planning Board regarding the MVA refusal to enforce the demolition clause.   The Planning Board refused to hear the matter, stating that they were aware of a court filing on the same subject. While the court complaint had not been served at the time of the Planning Board meeting, Village Keepers did serve the complaint after the meeting, having exhausted its administrative options to address the MVA’s refusal to act on the demolition clause.

The complaint was withdrawn when it was agreed that a “demolition” hearing would be held before the MVA.   Following that hearing (July 2015)  Village Keepers filed an appeal to the Planning Board a second time, alleging that the MVA hearing was not properly conducted.   In August 2015 the Planning Board agreed to hear the complaint and initially set a date in early September.   That date was moved, and the site plan hearing for the new building was allowed to proceed.   Ultimately the Planning Board approved the new site plan without ever hearing the appeal.  While this was a clear procedural violation (our ordinances say that MVA actions can be appealed to the Planning Board), funds were not available to Village Keepers to file another court complaint–in part because the financial wherewithal of JMF Properties, Steve Kalafer, and their associated tax-breaks, and their Planning Board approval, together amounted to too formidable an opponent.

This site chronicles the five year public process leading to the construction of Clarus Maplewood.   We recently re-arranged it to provide easier access chronologically and by topic area.  Check out the changes here or use our tag cloud and search features.

The Township recently rewarded a contract to a planning firm to coordinate community engagement and produce a new Master Plan for Maplewood Township.  Watch for Facebook posts from this site as this effort gets under way!

Our site archives the 6+ year process leading to the completion of the Clarus Maplewood building in Maplewood Village, NJ. Peruse the history by SPIRIT or TIMELINE, above…

Or by Category or Topic, below!